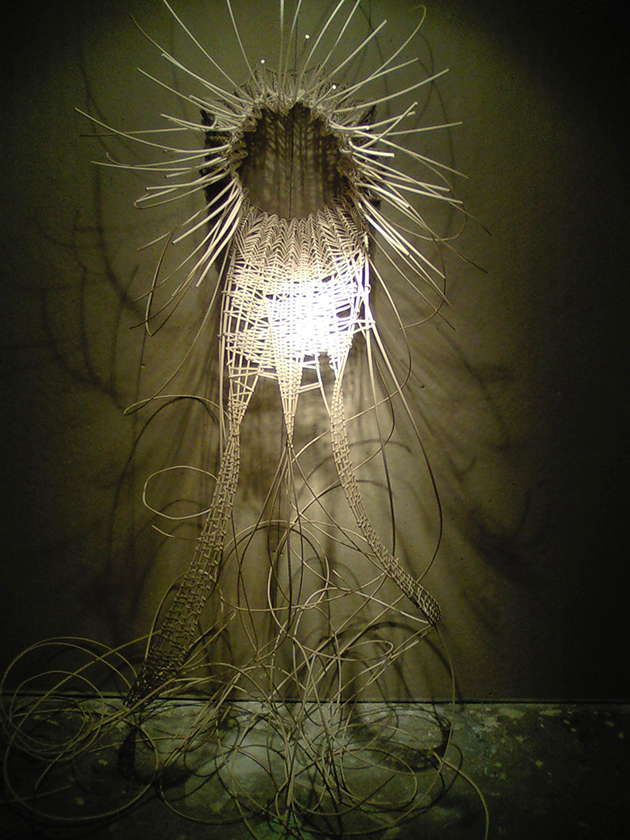 Artist Leonardo Drew who visited Tony’s studio at the Columbus College of Art and Design in 2013 expressed his surprise; “How did you do it so quickly?” He was referring to Tony’s transition from craftsman to artist.

Tony’s history with weaving started in 1993 on the floor of the Longaberger Co. where he worked briefly as a weaver, passed through a myriad of positions into basket research as a Project Coordinator and finally, after 17 years, ended his career with the company as a Product Designer in the Concept Studio. A basket with a special weave he designed sits in The National Red Cross Museum, Washington, D.C. His name is on 8 patents.

It is interesting to hear him talk about his evolution from craftsman to artist. He does not see it as a step up but rather as a step in. He makes distinctions. He works on a larger scale now…he works with nonconventional materials. But more profoundly, it used to be – I have this “thing” I want to make. What materials will be suitable? Versus now – I’m interested in weaving with these materials I wonder what will happen? As a craftsman I am very tight and controlling, a real perfectionist- as an artist, I had to learn to let go. I listen a lot more and feel  a deeper connection to my materials, he says. 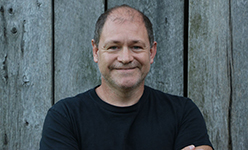 artist statement
I use my hands to attempt to transmit my ideas, my feelings, and energy into my work. For more than twenty years, I have worked with wood as a weaver and a carver. My home is on a farm, and the years I have spent working and living on the land have sculpted me and my practice.

Weaving is a creative act, which often starts in a state of utter chaos but moves toward an ordered system. I want my work to be powerful enough to provoke the viewer to touch the piece, to examine it more closely, with something like the awe induced by immersion in the phenomena of the natural landscape. My current work aims to highlight the contrast between the order of man and the perceived chaotic nature of material.