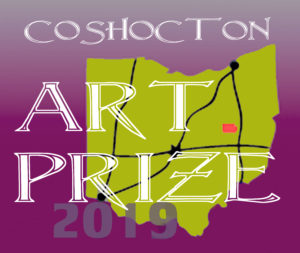 . $3000 in prizes. The competition is open to any person 16 or older who has a connection to Coshocton County – such as having lived or worked here at any time or has been invited by someone who does. Any visual form of art is acceptable with the proviso that the work be presented professionally and be portable and suitable for public display either at the Pomerene Center for the Arts in Coshocton, Ohio or outdoors in the artPark on Main Street in Coshocton, Ohio.  Click here for entry form and details
Entry forms due with $10 entry fee (new*) August 1, 2019
Entries accepted 9am-5pm August 3 & 6-8 and 9am-noon Friday, August 9
Exhibit opens with a reception 6pm August 9
Prizes Awarded 7pm August 9 immediately preceding Jazz on the Pomerene Lawn
Exhibit Closes 5pm Friday, September 20
Pick-up 9am-5pm Saturday, September 21 or 1-5pm Monday September 23
or by appointment