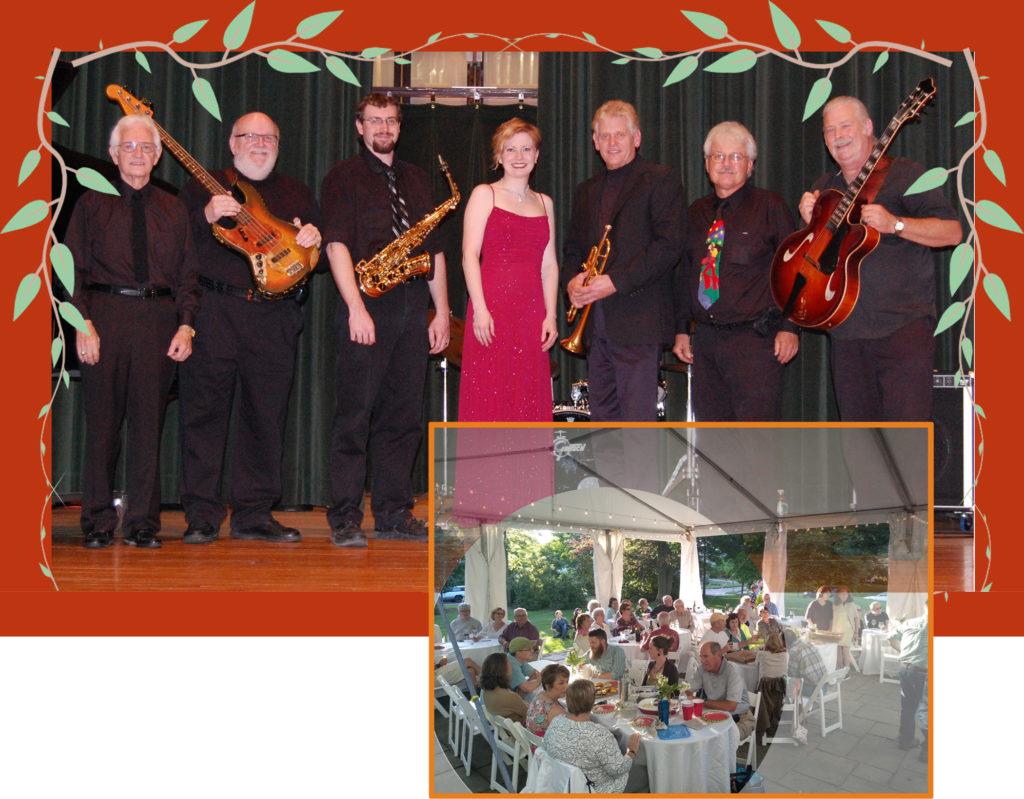 The Pom Lawn (so named by those who know and love the Pomerene) will be filled with music from the traditional jazz cannon … classic ballads, to swing, to Latin jazz, bebop and the blues. Please welcome The Muskingum Jazz Group.

The love of traditional jazz music brought the following six musicians together in the fall of 2010 at Muskingum University to form “The Muskingum Jazz Group”.

Don Kason – the groups leader and trumpeter. Don is on the adjunct music staff at Muskingum University. He has been a freelance trumpet player throughout central Ohio for many years and has played locally with Jerry Weaver’s “Good Time Jazz Band” and Tim Milligan’s “Big Fat Dog Blues Band”.

Len Thomas – pianist. Len is an internationally known conductor, arranger, pianist and vocalist. A graduate of Muskingum University and Boston University, he served as accompanist, choral director and principal arranger with Fred Waring and the Pennsylvanians for 31 years, and also directed the Fred Waring Choral Workshop at Penn State University. After Fred Waring’s death in 1984, Mr. Thomas founded and led the “U.S. Chorus” in a series of nationally televised PBS performances.

Jim Bock – electric bass. Jim is currently an adjunct lecturer in tuba and euphonium at Muskingum University. He is in demand throughout central Ohio as a freelance music arranger and electric bass player.

Gary Frey – drums. Gary palys drums with several local groups including The Potentials Band (classic rock), and a jazz-blues group the Brady Israel Trio. He has occasionally plays in the pit for Cambridge and Zanesville theater productions.

To make the musical event very special, the Muskingum Jazz Group will feature vocalist Jennifer Anderson, a New Concord native and Muskingum U. alumni. She has toured as a professional singer with the Christian rock band “Affix”. She now resides in Findlay, Ohio where she teaches vocal music and is the worship director of the Lighthouse Community Church.

The Jazz Group regularly performs concerts in the Fall and Spring at Brown Chapel on the campus of Muskingum University in New Concord Ohio. They have also performed for the Cambridge Concert Association and the New Concord summer concert series. This performance is the second Jazz on the Lawn of the season and The Muskingum Jazz Group’s debut at the the Pomerene.

The Pomerene front porch serves as the stage. There is seating on the terrace and lawn.  Reservations assure you of a seat under the tent. Call 740.622.0326 $10

The event is supported in part by Ohio Artists on Tour funding through the Ohio Arts Council.